We’re spoilt for choice when it comes to filming in the UK. From impressive cityscapes to historic buildings and dramatic highland scenery. Add another dimension to your event by recreating famous film moments. Dine where Downton Abbey was shot or run in the footsteps of Chariots of Fire. Where to go for drama, history and action when the UK Lockdown lifts. 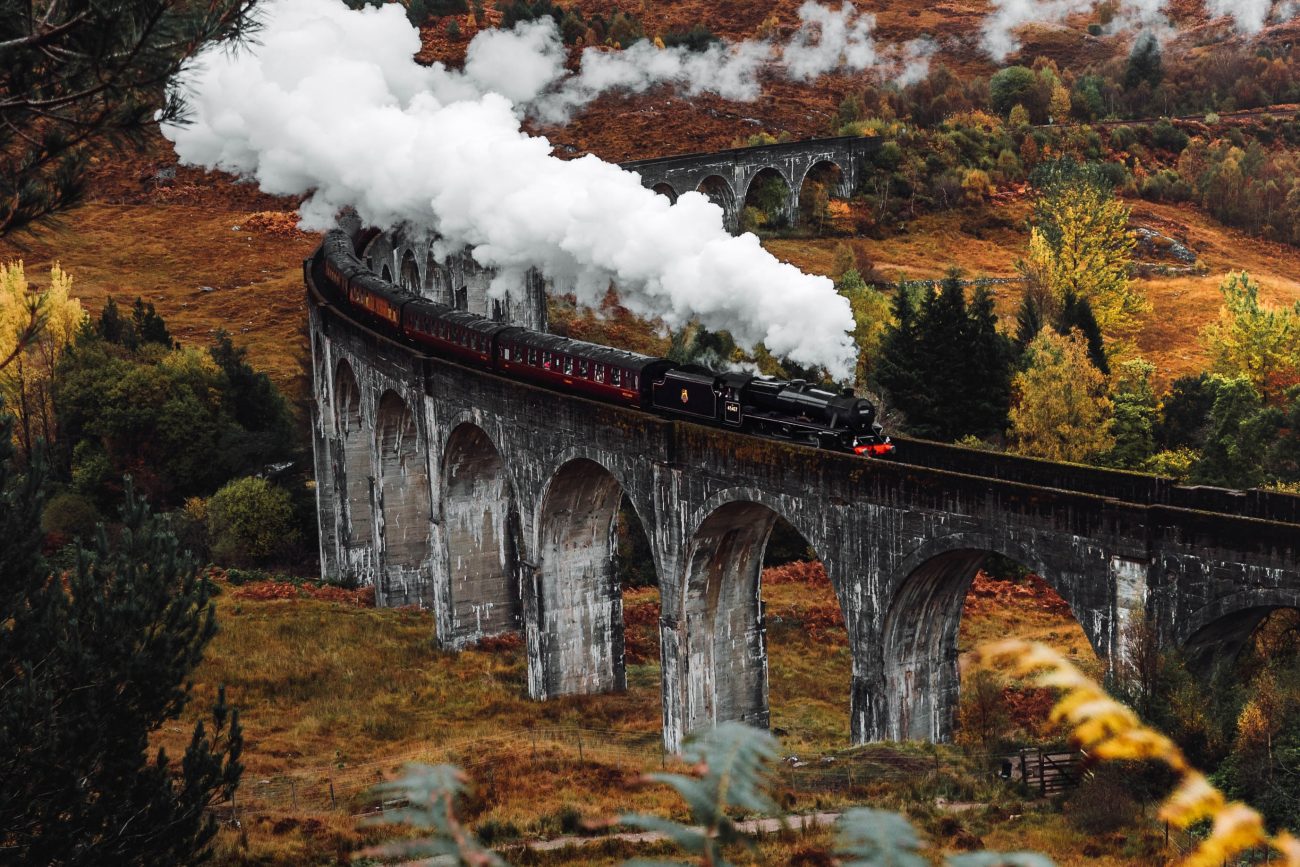 As part of a highland road trip, make time to stop and wave at the Hogwarts Express, or rather the Jacobite when it crosses the famous Glenfinnan Viaduct. Or better still catch a ride on the train itself! This setting is well known in the Harry Potter films, and we can vouch that the surrounding area is just as magical!

Okay, one more location for the Potter fans. Durham Cathedral is a beautiful place to visit, especially if you’re a wannabe wizard. It was here that the Hogwarts students ambled around in their robes discussing important things like Quidditch practice and how to defeat the dark lord.

Despite being made in 1981, Chariots of Fire remains a classic film. Most famous is its opening sequence of young men running in slow motion across a beach (in all white clothing – you can tell they don’t do their own washing).  It’s still parodied in films and TV shows today. And where was it shot? West Sands in St Andrews, Scotland. A beautiful university-seaside town, famous for being the home of golf.

Arley Hall in Nrothwich, England has played host to many films and tv shows, from Antiques Road Show to Songs of Praise. Most famous however is the BBC’s Peaky Blinders, where it acts as Tommy Shelby’s manor.  Arley Hall & Gardens is a place of enormous character with a fascinating history.
Best combined with a trip to nearby Manchester or Liverpool.  A fabulous location for a corporate dinner, especially with a Peaky theme (minus the violence)!

Just outside Edinburgh, this ruined castle doubles as the Scottish home of Jamie Fraser, the hero of hit Starz show Outlander. Include as part of an Outlander tour, or as part of your visit to Hopetoun House, on the same estate. Hopetoun House was also used in the filming Outlander as well as many other period dramas. A fabulous setting just outside Edinburgh for a Gala Dinner.

All Brits aspire to the coolness that is James Bond. An incentive to London can encapsulate all the glamour and drama of a Bond film. From beautiful cars, to private locations, and mystery tours. And of course a stop outside MI6 headquarters to see if you can spot the man himself! The real MI6 HQ starred as MI6 in the film because they decided keeping a low profile was overrated.

The stunning Highclere Castle is famous for the hit series, and later the hit film Downton Abbey. Steeped in history, it’s both a glamorous and fascinating place to visit.
Today, the Castle is the home of the 8th Earl and Countess of Carnarvon but is available for corporate events, and easily combined with a trip to London or Oxford.

Any cookies that may not be particularly necessary for the website to function and is used specifically to collect user personal data via analytics, ads, other embedded contents are termed as non-necessary cookies. It is mandatory to procure user consent prior to running these cookies on your website.